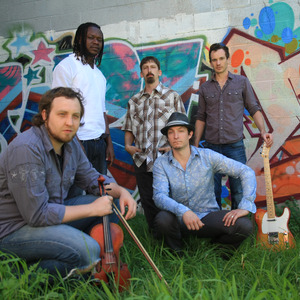 The music of Zansa, a Nouchi slang word from Ivory Coast meaning "combination" or "blend," is a synthesis of traditional and modern styles of West Africa. The Asheville, NC-based ensemble melds modern afropop with African folk music, African drumming, and the fiery dance-oriented Ivorian street music called Zouglou.
Zansa is ...
led by 33rd generation musician Adama Dembele, a native of Ivory Coast, whose family lineage is recognized internationally as "Djembeso," or House of the Djembe. With years of international performing experience, Dembele relocated to Asheville, NC in 2005 to start his own project. With Zansa, he has continued to develop and expand his sound, now singing in multiple languages- French, Baoule, Bambara, and English, creating a multicultural mix of original songs, traditional stories, and impassioned music.
Today, Zansa is taking those traditional African songs and rhythms and incorporating Western instruments, such as electric guitar, acoustic and electric violins, bass, and drum set, offering a wide range of sonic possibilities. The music is rooted in the West African drumming tradition Dembele was born into and blended with a modern approach, lending familiarty to foreign sounds. The result is an original take on the authentic music of West Africa.

Based in Asheville, NC, Zansa is led by Adama Dembele, a 33rd generation musician from Ivory Coast, whose ancestry is recognized throughout West Africa as the House of the Djembe. Since the 12th century, oral storytelling musicians/historians known as griots have carried forth the Dembele name and recognition as masters of the djembe. Today, drummers from across West Africa still study under the Dembele family in the Ivory Coast. Adama moved to the United States in 2008. He has performed alongside other West African-influenced bands, including Afromotive and Toubab Krewe. Zansa is his debut outfit, offering songs that are influenced by modern Zouglou beats and traditional African stories, sung in French, Bambara and Baoule dialects, as well as English.

The album, Djansa, marries Adama’s West African drumming traditions with modern instrumentation and song forms. While the djembe drives the rhythmic component, the violin plays a unique role as a lead melodic instrument, echoing the soku, a one-string predecessor that originated in Mali. Electric guitar, bass, percussion, and drum set lend familiarity to foreign sounds. “Many of the songs are from old stories I grew up with, such as the legend of Donsson, the hunter,” says Adama. “We sing about love and celebration, respect and understanding, and we play hard.” This cultural and sonic mix offers an original take on the authentic music of West Africa.

Djansa is being released online (iTunes, Amazon, CD Baby) and in select record stores on September 10, 2013, with performances throughout the Southeast to follow.