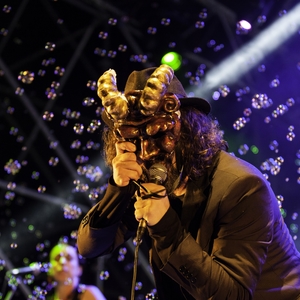 “To Make Things Better: Sing Out”

The musical heroes of Italy aren’t that known outside of the green-white-red borders. But that ought to change. Luca Bassanese is without question one of the main characters of the new committed Italian popular music and the next hero to be watched up.

A fusion between Fabrizio de André, Goran Bregovic and Manu Chao, with a Fellini-inspired mindset, Luca Bassanese has released twelve albums since 2006. Minstrel, poet, singer-songwriter, and social/environmental activist, Luca is on a mission and can be seen as a romantic warrior of our modern times.  Luca’s interest for social change has lead to a sprawling set of many-coloured songs:  to poke fun at some of the damn foolishness going on in the world; songs of love and faith in mankind and the future; songs to needle our conscience; and songs to take a constructive stand in our life.

Luca grew up listening to Fabrizo de André and the legendary protest singers of the 1970’s. Enlivened by the powerful folklore of both sides of the Adriatic, he then created his own brew. His cocktail of poetry, love stories infused with Italian folk music, transalpine tarantellas and Balkan hints of brass put people in a good mood and take them to the fantasy world of ecotopia. Luca's shows are circassian, ruffling and full of positive energy.

Luca has already won several honorary awards in Italy. He has collaborated with artists from various fields and countries, including the Original Kocani Orkestar of Macedonia, the Berber artist Bachir Charaf (nicknamed The Voice of the Desert), the satirical artist Antonio Cornacchione, and the playwright, actor and Nobel Prize Dario Fo, to name a few.

​Abroad, Luca has received standing ovations at some of the major European live music events in France,  Spain, Benelux, Austria, Switzerland and Hungary. He has demonstrated that his performances are accessible to people of all ages, nationalities, creeds and backgrounds - and non only to Italians.

In 2019, Luca published a new video clip every month until the release of his studio album “Liberiamo l’elefante” (Free the Elephant Within Us). In February 2020, he won the Viareggio Carnival Music Awards for the best soundtrack of the street parade with his song “Home Sweet Home – Save The Planet”.

All this has been possible thanks to his long time collaboration with Italian producer and guitarist Stefano Florio.

Passerà (It Will Pass): New Single - Survival Song in Time of Covid-19 Lockdown

Amid wide scale cancellation of tour dates and closure of venues across the globe in an attempt to stem the spread of coronavirus, many artists have turned to live streaming on social platforms in an effort to comfort their fans and combat social distancing.

Broadcasting live with an accordion and a guitar from his living room in Padova, the European Capital of Volunteering, Italian new musical hero Luca Bassanese is sharing daily on his FB channel his positive energy with an ever increasing community of followers (more than 52.000) through music and poetry.

People come and join the conversation by hundreds because of the sense of intimacy, heartfelt warmth, and timelessness. And while medics and nurses are on the front-line in hospitals, participants in Luca's shows get an opportunity to share their stories of hope and trust in a still unknown future. With Luca, a song and a smile become more contagious than the coronavirus itself.

With his  new single “Passerà” (It Will Pass), Luca Bassanese is sending us a message: stay strong, healthy, creative, and keep the spirit up. “It will pass….you’ll see we’ll go through this together…It will pass. I don’t know when and how, but you’ll see…it will pass”. A living room, a voice, a guitar, an accordion, three cats and the many faces of Luca’s community are just the perfect setting for the video clip that goes with the song.

Luca Bassanese and his producer and guitarist Stefano Florio feel like to be on a mission - to inspire people and stimulate them to walk their life in beauty. Music and poetry are the tools of what they see as a healing and teaching process. They made the words of Saint Augustin “Those who sing pray twice” their own. For them, producing good songs and music can enlighten and liberate people, inform, motivate and make them strong in finding creative answers to harsh situations.

The journey started more than a decade ago when Luca released the album “La Società dello Spettacolo” (The Show Business Society). Since then, Luca has released twelve albums, including a live recorded at Nyon’s Paléo Festival in 2018 with the partnership of the European Broadcasting Union.

A fusion between Fabrizo De Andre, Manu Chao and Goran Bregovic, with a Fellini-inspired mindset, Luca is part of the new committed Italian popular music. His live performances make you feel good – about yourself, the others and the planet. You might not understand a word, but no matter. The trumpeting wake-up call is there and is talking to the best of yourself.